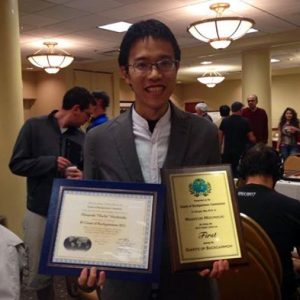 Two of the leading backgammon players in the world will visit Newcastle next month.

Masayuki Mochizuki – aka Mochy – and Phil Simborg are to visit the North East Backgammon Association on Monday 26th March.

Mochy is the current world No.1 ranked player and a former world champion, while Phil is one of the leading lecturers and tutors of the game in the world.

They will give an hour-long presentation about strategy and tactics of backgammon.

If time permits, Mochy will be available to play a 3-point game for £50.  He is willing to play two matches simultaneously and for players to buddy up in consultation doubles or trebles against him.  A trebles team would therefore only have to play £17 each.

Mochy and Phil are guests of the North East Backgammon Association (NEBA).
Club chairman Martin Barkwill said:
“It’s a great honour to have two of the most famous backgammon players in the world come to Newcastle to give a lecture and be available to play matches.
“The event is not just open to members of NEBA.  Anyone is welcome to come along and take part.”
There is a £15 charge for attending the event.
The event will be held from 7pm at the Royal British Legion Club next to West Jesmond Metro Station (NE2 3EX).  There is free parking at the club.
If you are interested in attending, please email Martin at: martinbarkwill@btinternet.com