Our first “Up The Junction” tournament was attended by nine dice warriors.  We played a 5-point Main and a 3-point Fighters Bracket.

Our very own NEBA stalwart Alan Hind made it straight through to the final where he met Paul Moulton (who had travelled up from York) from the Fighters Bracket.

Paul (pictured right) won the five point and then a three point match to claim victory.  A good venue and they said they would be happy to see us back again.

We are holding a special one-day event at The Junction pub next to the Haymarket Metro station in Newcastle on Saturday (August 27).
The event starts at 11am and will be held in the upstairs bar.
We hope to hold an event at this venue every two months.  If you’d like to take part please email us at:

Minutes of 2018 were read by MB who added that since this meeting we had lost two of our members, Paul Gilbertson & Antony Crerar & we had fielded two teams in the UK Clubs Championship with the 1st team suffering the indignity of being eliminated by the club’s 2nd team. We have recommenced twice monthly meetings, the second run by Keith.

NEBA is hosting the next Clubs Championship in York this August with Keith acting as TD. MB asked those present if they would be available for selection. We have been challenged to a friendly match against Glasgow probably in the summer before the Clubs Championship. Several of those present expressed an interest in this & hoped to be involved.

Alan Hind had submitted a request in writing prior to the meeting for the club to adopt a code of etiquette & had downloaded Phil Simborg’s guide from the internet. He felt the club should promote good practice & make it clear what is or isn’t acceptable. It was also mentioned that a video exists of Jon Barnes explaining the correct method of rolling the dice. The meeting was in agreement with this & MB said he would seek Phil’s Simborg’s & Jon Barnes’s permission to place their contributions on the club website.

Jonathan Backhouse, a visitor from Stockton mentioned that a new club had formed in Stockton on Tees & if NEBA club members were to visit this club they would be very welcome. Another new club has formed in Saltburn. MB said we should definitely support new & fledgling clubs in the region & would make a point of visiting in the near future. A few others said they would also try to do so. Keith, who was not at the meeting, has already visited both clubs & found them keen although some way short of our playing standard. Jonathan asked a question about the appropriateness of playing for money. MB said we only play for nominal stakes @ NEBA however it depends on the venue host as to whether they feel comfortable with this.

Mike Snowdon mentioned that he & Jamie had recently played at the Victory pub in Gosforth & experienced a high level of interest from other customers. They typically meet on Sunday afternoon & would try to get some of them along to the club.

Graeme advocated the purchase of more clocks & it was agreed that some expenditure is justified.

Post AGM: Phil & Jon have both agreed to their etiquette guide & video may be used on the club website. We have been challenged to a friendly match by the Lake District club. MB in discussion with Paul Galley on this.

Leading UK player Jon Barnes talks about how to make sure all your rolls are legal, specifically discussing section 4.1 of the UKBGF Rules…

In matches played without a baffle box a valid roll consists of the dice being shaken vigorously in a cup and then rolled out of the cup onto the playing surface of the board. During this process the dice should not touch the player’s hand and the cup should not touch the board. The dice must roll freely and come to rest lying flat on the playing surface of the board to the roller’s right of the bar. If this is not the case, the roll is deemed invalid and must be retaken.

by Phil Simborg, 1999
Taken with permission from Backgammon Galore!

I don’t know if anyone has yet written a definite code of ethics, or code of conduct for backgammon play, but it is sorely needed. And it’s needed not just because there are some jerks with very poor ethics and courtesy playing the game, but because many of us just don’t realize how certain things can be perceived as unkind, or rude.

So, for what it’s worth, here are things that bother me that I would like to suggest should be the do’s and don’ts of backgammon play. Most of these apply to both live matches and electronic (internet) play. Chouette play has even a more complex set of standards. 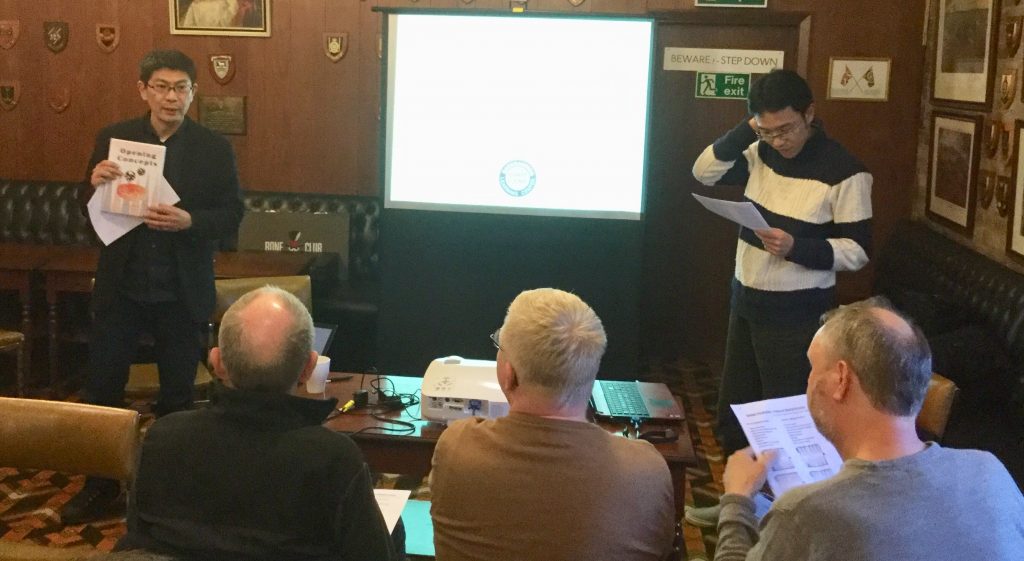 The two top players in the world, Mochy & Michy from Japan, visited our club after playing in a tournament in Bradford in 2018. Mochy faced a challenge from one of our members, John Horton. John sensationally beat Mochy 7-3. 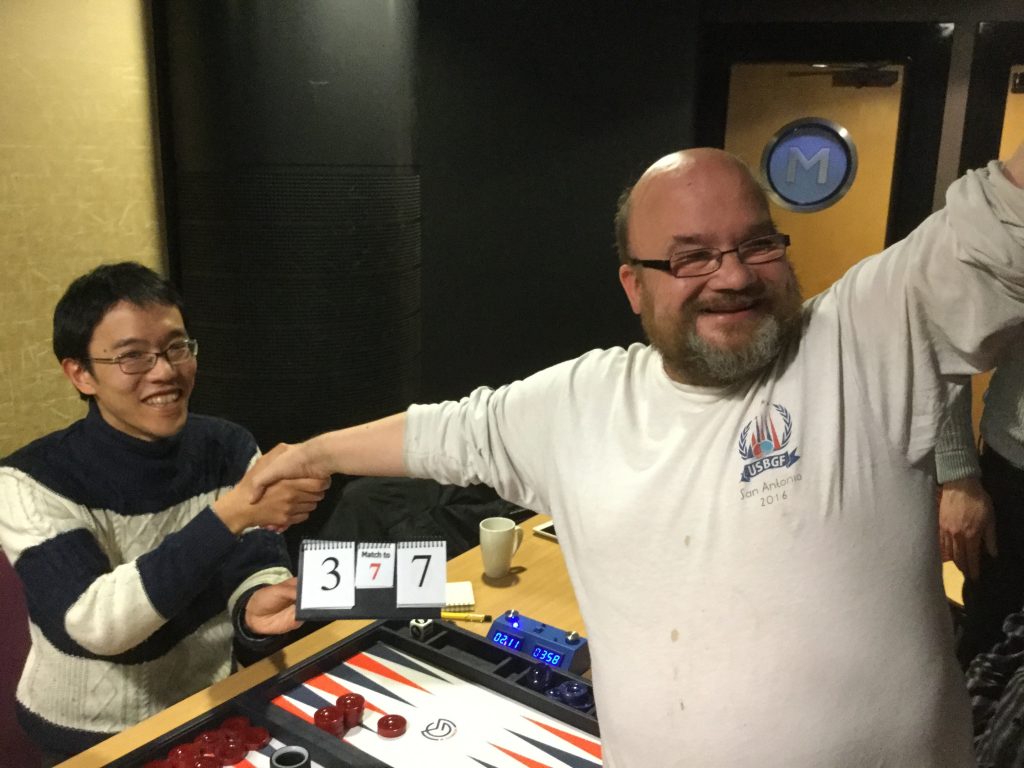 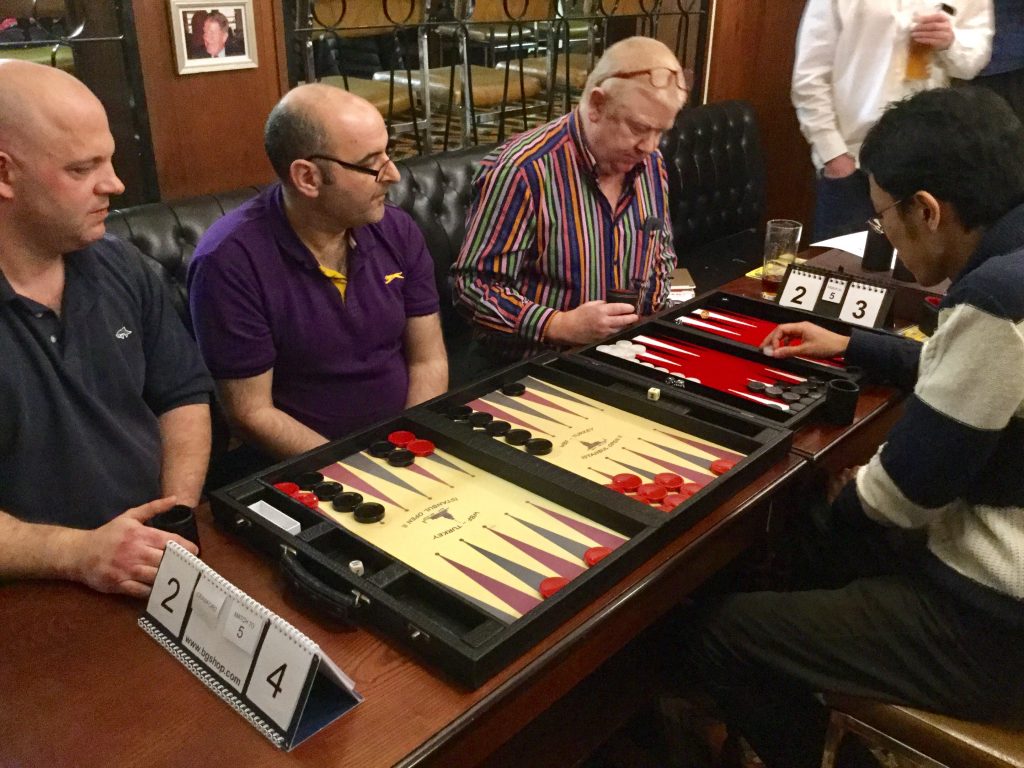 Congratulations to John Horton, who picked up the Division Two Trophy and earns a promotion to Division One after securing 5 wins out of his 6 matches played.

Division One was won by Grandmaster Tim Cross, who pipped Martin Barkwill to the title. They both finished with 5 wins out of 6 and Tim came out on top in the play-off. 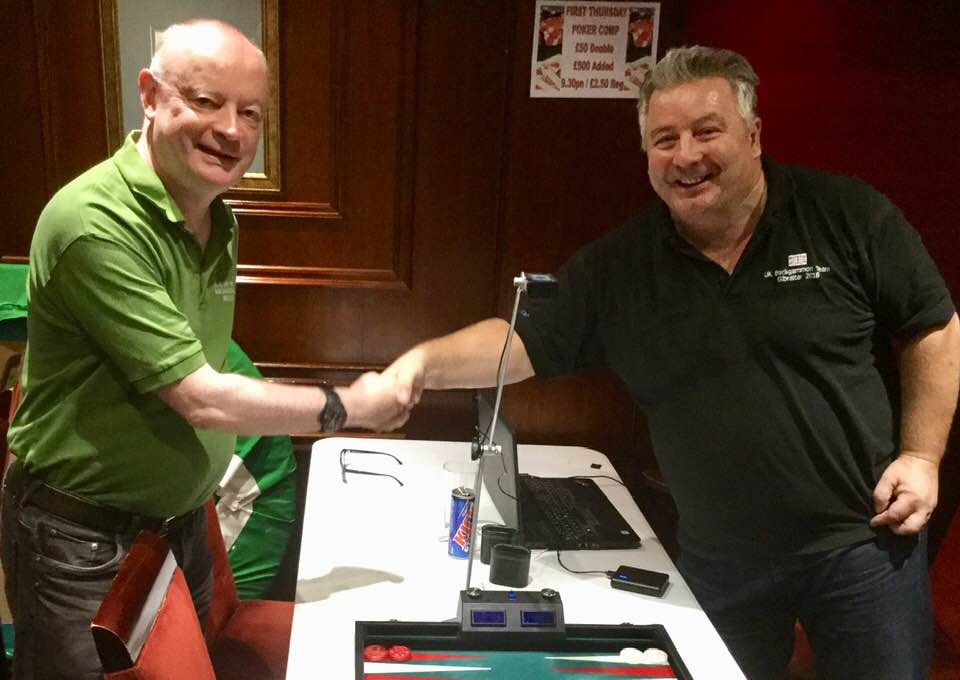 Martin came out on top on this occasion, avenging the 2018 NEBA League One play-off defeat to Tim earlier this year.

Here he is claiming his victory handshake from Steve Lee… 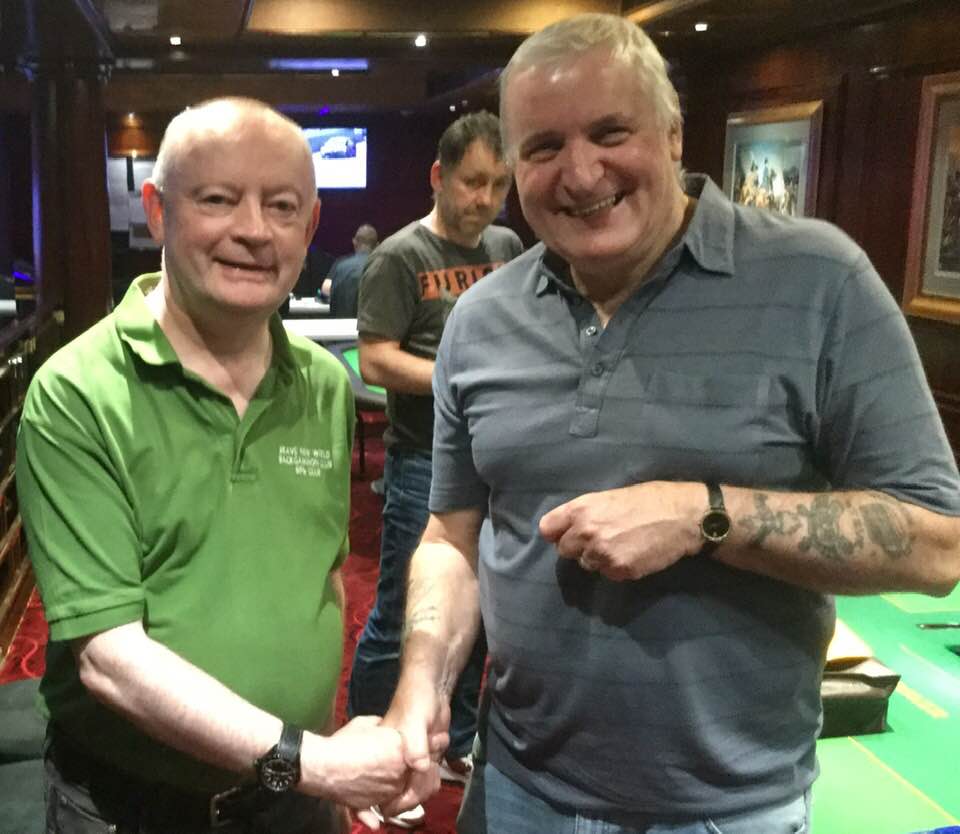 Coming just one week before both Tim and Martin will represent NEBA in the UK Clubs Championship in York, it can only bode well for the club that these two great players are in such fine form. 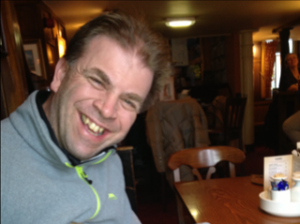 This year has been a sad year for the club, following the untimely death of another NEBA member in their fifties.
Antony Crerar was instrumental – along with his good friend Chris Humble, and others – in setting up the club in 2015, and attended early meetings in The County, Gosforth.
Sadly, his illness prevented him from retaining his involvement, so he will not be known to many current members.
He fought a long and brave fight against his severe brain tumour, and our thoughts and prayers are with his wife Pam, children Jordan and George, and extended family. 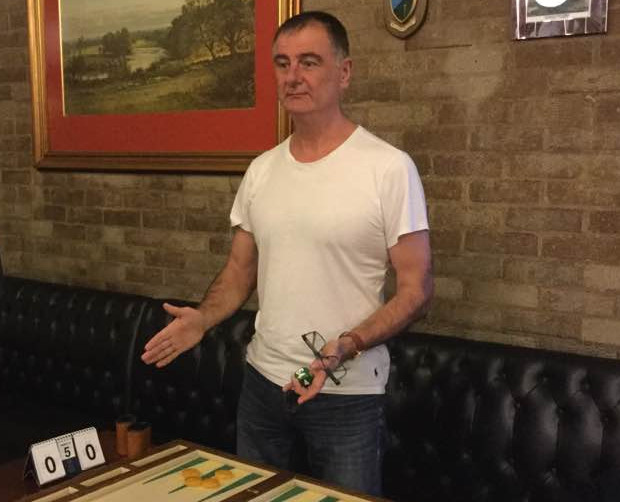 It is with the deepest sadness in our hearts that we have to say goodbye to our very dear friend and NEBA member Paul Gilbertson, who was taken from us far, far too soon.

Nothing can be said about Paul that hasn’t already been said since his passing.
The outpouring of tributes from the backgammon community shows us all just how loved he was.
He was a man that had absolutely no idea at all of how popular he was, and as tragic as fact is, now that he has passed, it may well be the biggest reason (among many, many reasons) that he was just so very special.

NEBA will honour Paul with a minute of silence and some tributes at 7.25pm on Monday 4th June at our monthly meeting and Paul’s funeral will be held on Wednesday 13th June 2018 at Durham Crematorium, South Road, DH1 3TQ beginning at 11am and all are welcome.
No flowers, please. Instead donations to the MIND mental health charity would be appreciated.

Paul’s family are hosting is a tournament at 1pm on Tuesday 12th June at the Honest Lawyer Hotel, Croxdale Bridge, Croxdale, Durham, DH1 3SP & several players from around the UK are expected.