Having not posted in 6 months (in my defence, I got a new job and moved to a new area), I am going to have to summarise the second half of 2017 in one fell swoop! 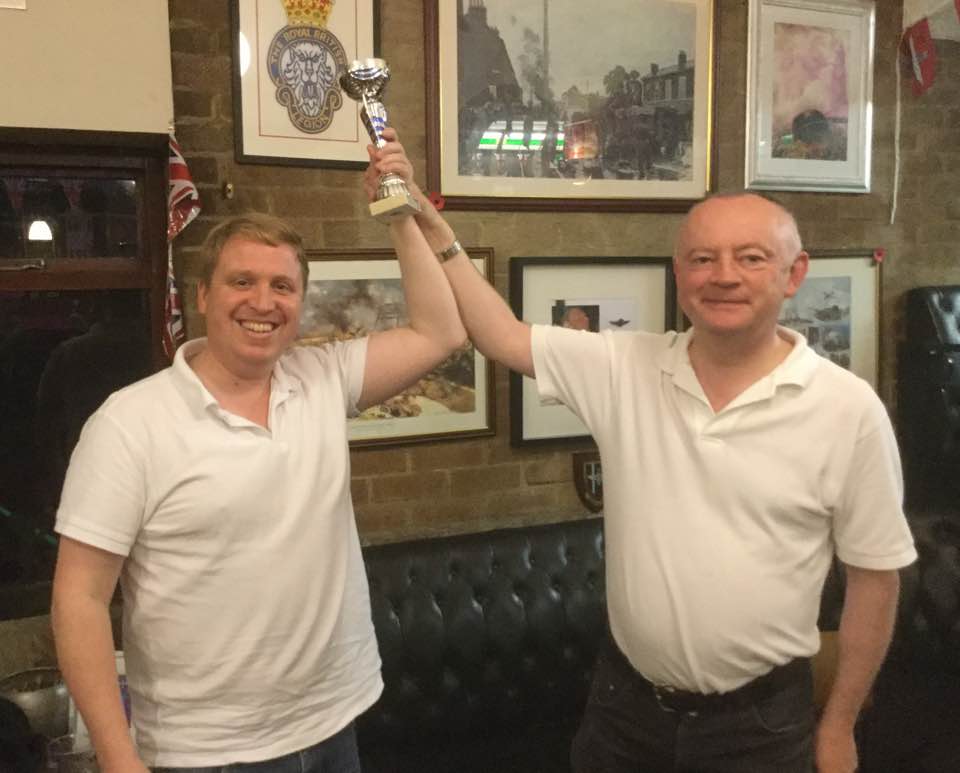 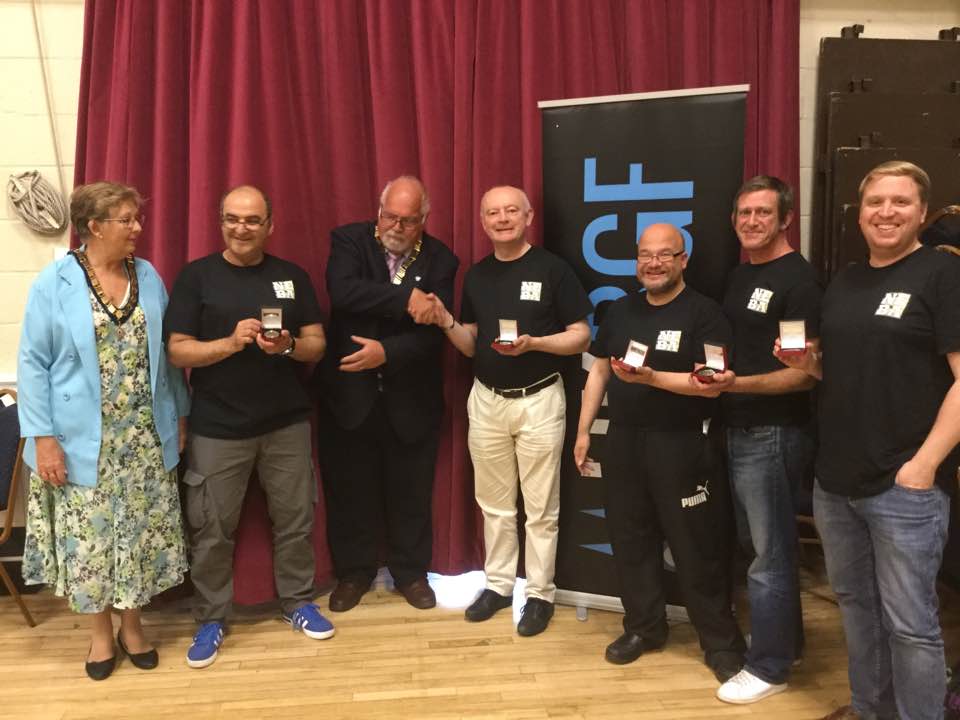 Mike Snowdon beat John Horton to take the win in the September Monthly. 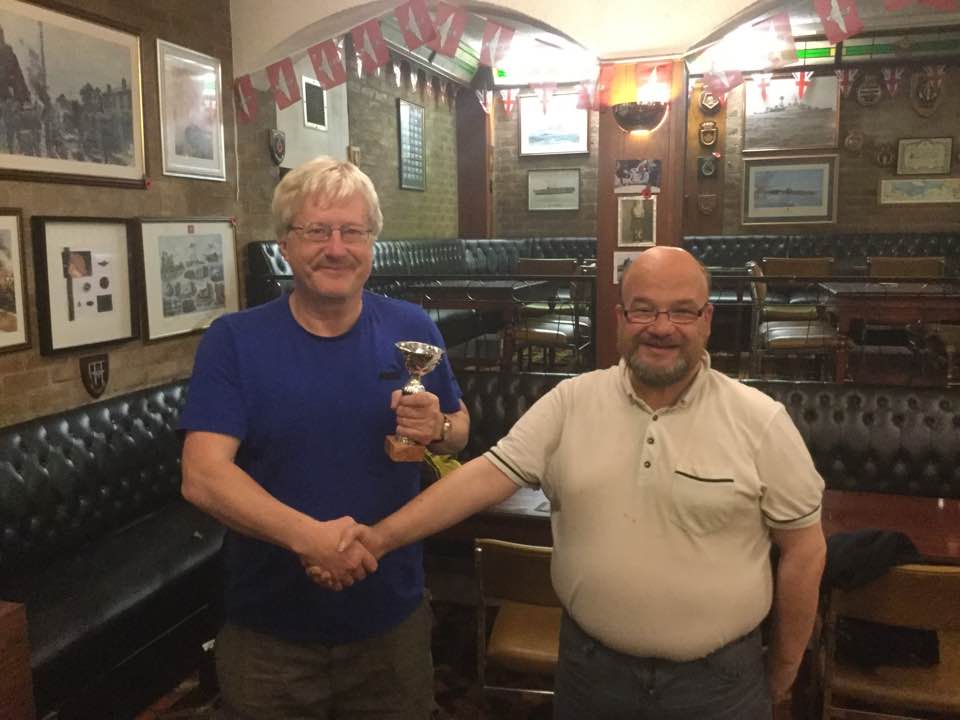 Scot Alastair Woods lifted the Newcastle Open 2017 Trophy, with NEBA member Graeme Turner finishing as Runner Up.
The event was a great success and was superbly run by Tournament Director Keith Gill 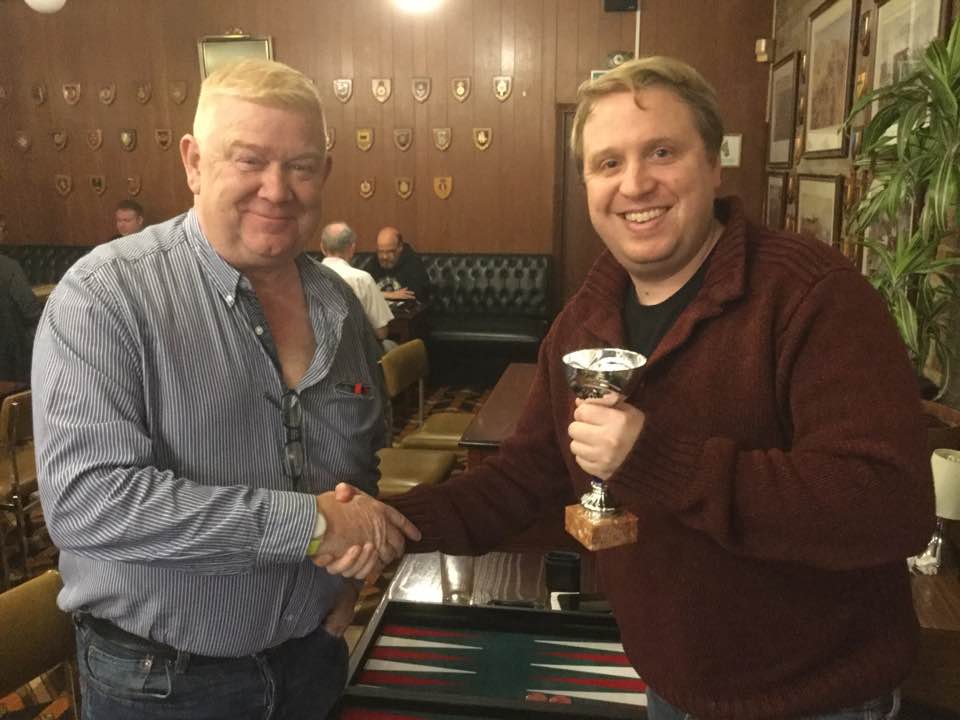 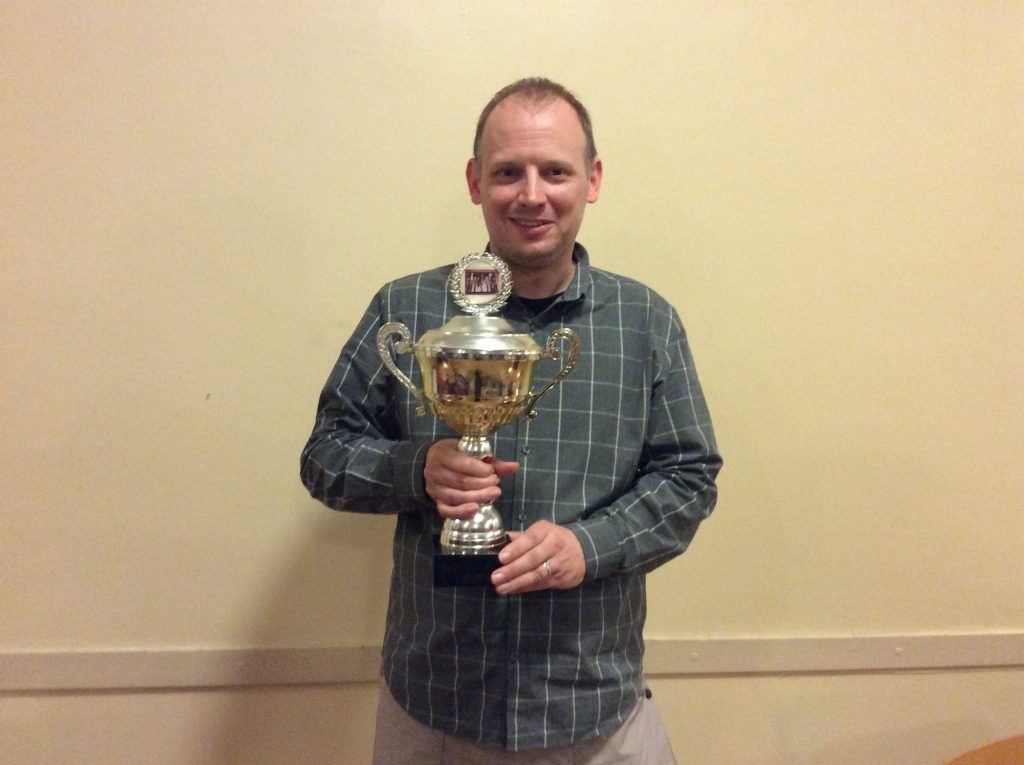 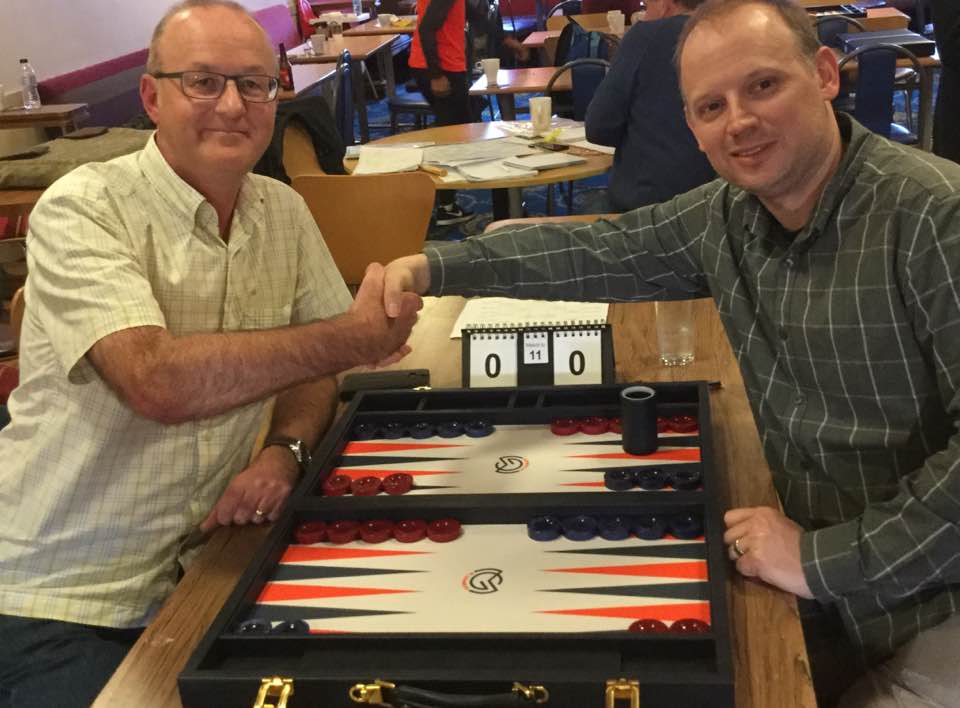 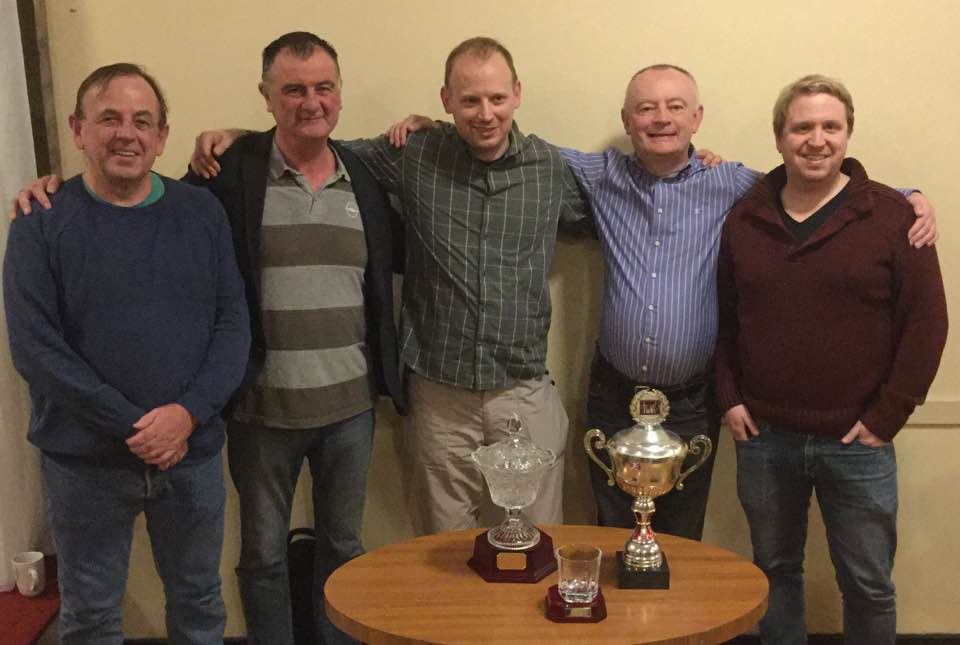 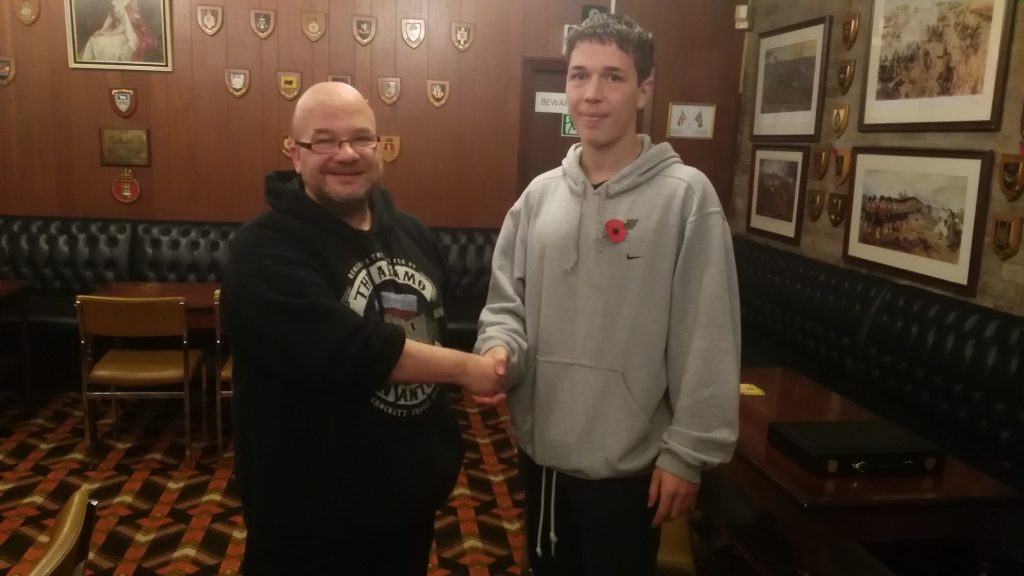 It was Alex Schofield who took the December Monthly, with a final win over Keith Gill. 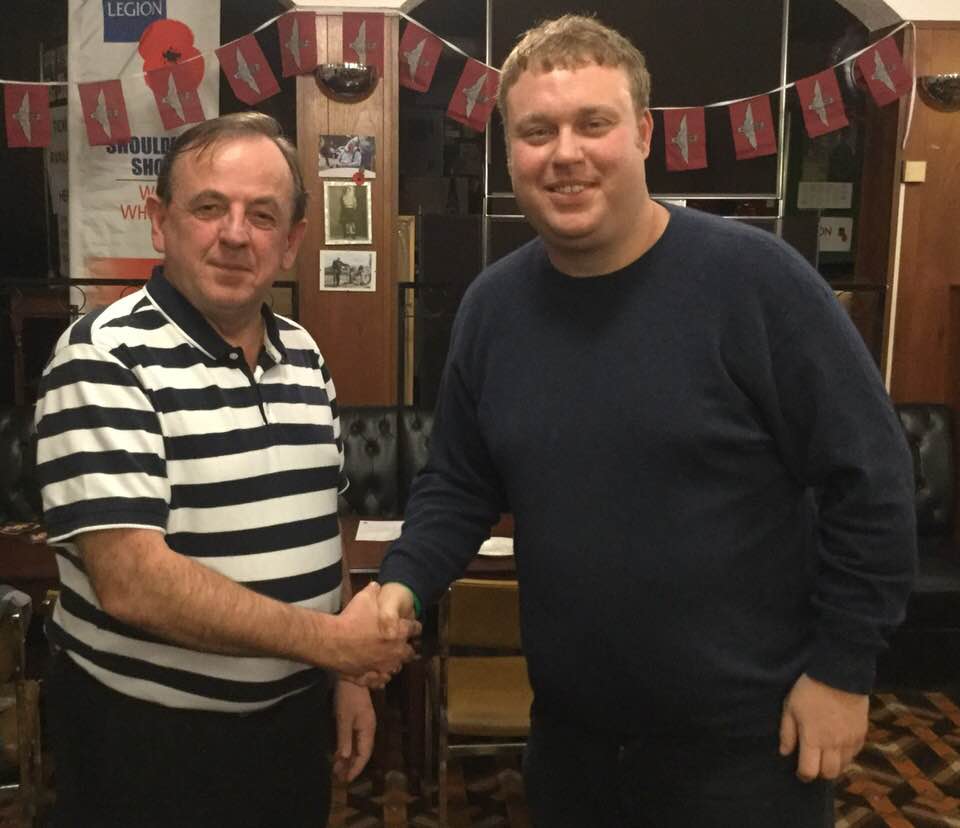 Mike & Paul split the £50 prize money, having both made it through to our mini-tournament final at the Royal Legion.

We welcomed a new member, Alex Schofield, who acquitted himself very well on his first visit, narrowly losing out to Mike in the semi-final. 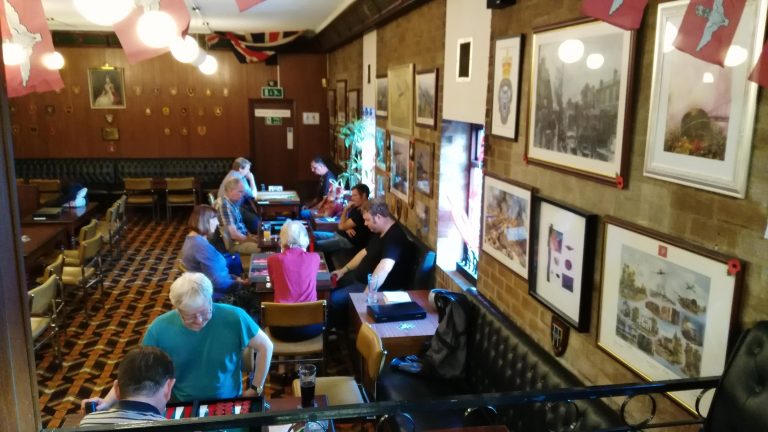 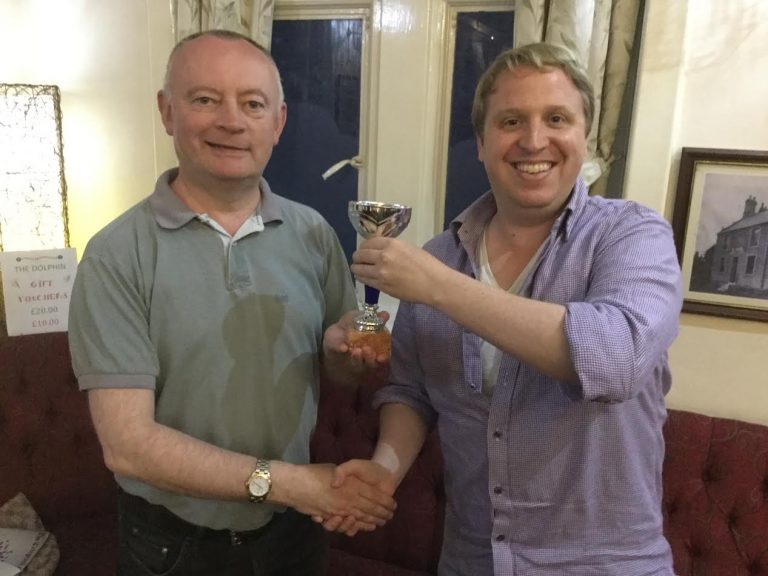 Honours were even in our second meeting of June, held at The Dolphin Inn in the beautiful seaside town of Tynemouth.

Martin & Gary shared the win and the trophy in a closely contested mini-tournament featuring 8 players.

The third Thursday of each month will be held at a different venue around the North East and next up is The Butcher’s Arms in Chester-le-Street on Monday 17th July. 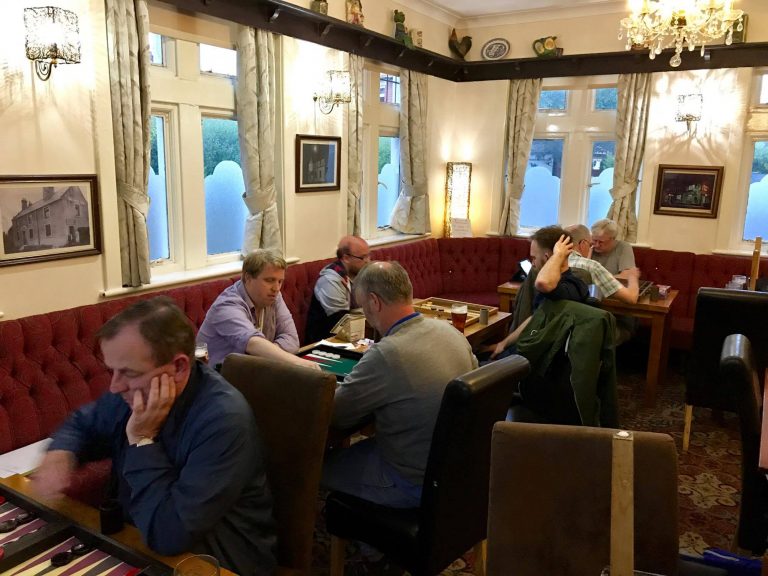 We are grateful to Don for organising the venue for us; this being his local pub.

Pol Lapidakis came out on top in the mini tournament at our first June meeting.
Playing 5pt matches, Pol twice came from 4-0 on his road to victory, including in the final against Keith.

Eight players took part in the 3-round mini tournament, and there were also 6 league matches played on the night.
Another healthy turnout of 12 players made for a really enjoyable evening of backgammon at the Royal Legion Club. 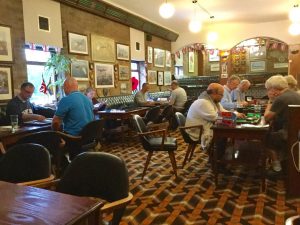 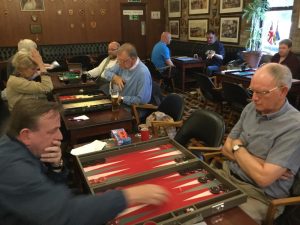 Representing NEBA in the UK Champions League 2017, Gary Bratton has qualified for the Champions Final Stage by virtue of finishing in the top two of Group G.

Gary was pipped to first place in the group by Eric Maillebiau and now faces Group H winner Lawrence Powell in the Last 16.

Eric’s (rather unfortunate) reward for finishing top of the group is a Last 16 tie against Gaz Owen, one of only two Backgammon Grandmasters in the UK.

Last 16 ties are the best of three 11pt matches to be completed by 31st August.

Constitution of the North East Backgammon Association (the “Constitution”)

Minutes of the North East Backgammon Association AGM on 1st May 2017:

1. Treasurer’s Report & Accounts
2. Reports of other officers
3. Election of Officers
4. Election of Auditor
5. Proposal to adopt draft constitution
6. Any Other Business

It is with sad news that we had to announce the resignation of our current Treasurer Graeme Turner, who is therefore unable to deliver his report.
Graeme was a founder member of NEBA; he made a significant contribution to the club throughout his involvement and will be greatly missed.
It is now necessary to find a replacement Treasurer.

Reports of other officers

Social Media update from Pol Lapidakis
Pol reported that we currently have 120 followers on the NEBA Facebook page.
He welcomes additional content contributions from other members.
Tim asked if Pol could adjust the page settings to allow member posts to appear more prominently.

Promotional activity report from Mike Snowdon
Posters & leaflets/postcards need to be finalised by Gary & Mike.
Then they can be distributed throughout different locations by our members.
John Horton was tasked with inquiring about a half-page advert in a local chess magazine.
Mike & Gary would co-ordinate the design of the ad.

Nominated by Martin, seconded by John O. and unanimously re-elected

Mike asked the question of how members are defined.
Tim asked about how non-members will feel and how they will be treated.
John O. suggested that non-members be allowed to attend twice before they are asked to become a paying member.
Martin suggested that all members pay an annual membership fee of £10 and this was unanimously agreed upon by all in attendance.
Pol advised that the fee would be payable in June 2017 for the following 12 months.
Martin proposed that the draft constitution be adopted and this was unanimously agreed upon.
Mike suggested that other UK Clubs be allowed access to our constitution and Martin offered to send it to the UKBGF.

Mike suggested that the second monthly meeting be held at the Royal British Legion, rather than the casino as it has been.
It was decided that we should keep reviewing the venue for the second meeting.

Gary suggested changing the name of NEBA to ‘Newcastle Backgammon Club’ but the majority of members preferred to stick with the current name.
Gary asked if we could change our name on the UKBGF Clubs page to ‘North East’ instead of NEBA.

Tim offered that any suggestions for the UKBGF from our members would be passed on, as he is a UKBGF board member.
Tim also asked if there can be more club nights devoted to playing league matches.

Martin advised that we would be having our One Day tournament on 17th June at the casino.
July’s first meeting will include an anniversary competition.
We will need to decide the line-up of either one or two teams to enter into the UK Club Championships in August.
And finally, the Newcastle Open will be held upstairs in the Royal British Legion on 21st-22nd October.